The Art of Napkin Folding

For best results, use our Linen Like Flat Dinner Napkins. Linen-like napkins from MyPaperShop.com are wrinkle free, of course. They are beautifully packed flat and ready for your creative touch.

Treat your customers to the most sanitary place setting of paper, with the feel and weight of cloth napkins. No stains, no laundering and ironing expense. 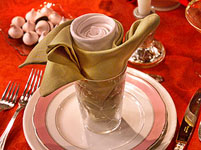 Floral Bloom Napkin Folding InstructionsThis napkin fold works best with two paper dinner napkins and two different colors. To create the leaves, fold a square napkin in half diagonally to form a triangle. Fold the triangle in half again along the long edge, and once more along the smaller triangle’s longer edge.

Create the flower portion by folding another paper napkin in half diagonally, as above. Place it on a work surface with the point facing down and the long edge at the top. Take the point (the corner opposite the long edge), and fold it up so its tip slightly extends beyond the long edge.

Fold the shorter, bottom edge up to a point just short of the long edge. Begin rolling the paper napkin up tightly from either the right or left side, guiding the cloth as you go to keep it even. 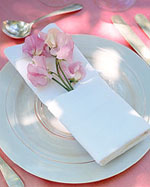 Napkin PocketsTo fold the napkin, lay it on a flat surface, and fold in half widthwise so the folded edge is near you. Fold the top layer back down halfway. Turn the napkin over, and fold the edges into the center. Finish by folding the napkin in half.

Tuck a sprig of mint or oregano into the pocket on top. For the holidays use a tiny evergreen sprig and for New Year’s celebration or birthday, tuck a small party favor inside.

The Rectangle or TriangleFold one napkin in quarters and then in half to form a rectangle or triangle. The loose corners of the napkin should always be on the left or lower left, so guests can simply lift one corner to gently unfold the entire napkin.

The DrapeGrasp one unfolded napkin in the center. Lift and gently gather the sides; then finish with a loose-fitting napkin ring, or tie ribbon or twine in the center.

After folding, place the napkin on or beside a dinner plate.

The RollFold one napkin in half and then roll from one end to the other. Slip into a napkin ring, or tie in center with ribbon, raffia, an ivy branch or silver braid.

The KnotFold one napkin into a large triangle, then roll the outer tip in to form a tube and tie in a loose knot.

The Diamond – Version 2Use one napkin, instead of two napkin colors shown above. (Similar to the Diamond Fold above, but the right and left points are tucked under instead ot folded up.)

Fold napkin into quarters, then fold the right and left points underneath to create a point at the top and a V shape at the bottom

Four FeathersCrease the napkin with the iron along both of its bias lines. Fold the first corner from tip to center to make a 45-degree angle. Fold the second corner the same way, bringing it an inch away from the first corner. Press the napkin. Repeat these steps for the third and fourth corner, pressing after each fold. Fold the bottom third of the napkin up to the middle, roll it into a cone shape, and insert it into a glass.

Lotus FlowerFold all four corners of the napkin to the center, and press. Flip the napkin over, and fold the corners to the center. Press the napkin. With one finger pressing down on the napkin’s center, reach underneath, and pull the flap at each corner partially out to create a lotus flower.